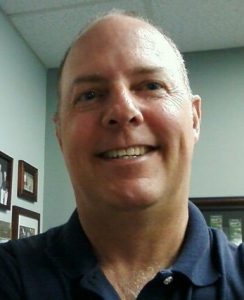 After eight and a half fun-filled years as sports writer, editor and occasional sportscaster in Texas and Florida, Rob Stamp was convinced in 1992 that it was time to grow up, return to St. Louis and enter the family business. Following in the footsteps of his father, Bob, Rob is the agency principal at Meadow Park’s Manchester location. He’s involved daily in all facets of the agency’s operations and is particularly proud to recognize customers’ voices and loves telling callers, “We go by names, not by policy numbers.” Rob contends, “It’s all about personal service.” A 1984 graduate of Southeast Missouri State University, Rob has two children: Victoria, 26, a Mizzou nursing school grad working at St. Louis Children’s now also enrolled in a nurse practitioner program at Rush University; and Derek, 25, a former freaky fast sandwich artist now working in the Wallis Companies commissary in Fenton.

Of course, sports continue to have a profound influence on Rob’s life. (Perhaps too profound for some.) He continues playing ice hockey and is thrilled beyond his years that he now pays the senior rate at most golf courses. (Shame on those who don’t recognize 60 year olds as seniors.) Rob was an original contributor to the Game Night Revue publication for St. Louis Blues fans and produced The Moose Turd, the irreverent souvenir program for the Moose Golf Classic, of which he’d ruined many. His creative juices are now spent personalizing greeting cards and writing snappy messages he sometimes shouldn’t. Finally, that siren you just heard may not have been an emergency vehicle. It could have been Pup.

Need an insurance quote? Get in touch!

Access quotes from Missouri's most trusted insurance carriers. It’s comparison shopping at the click of a mouse.